I haven’t read this in years and it was great nostalgia!
In this very first SVT Super Edition Elizabeth teaches us that it's possible to have an Alice in Wonderland-type experience without the aid of LSD.
FYI: This super edition was first printed after SVT #19 The Bully. This is what is says at the very end
Join Jessica and Elizabeth for an exciting adventure in Sweet Valley Twins Super Edition #1 The Class Trip. 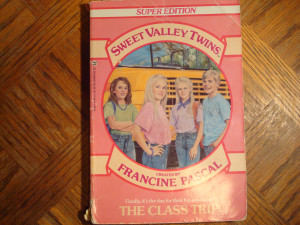 Who ARE these people?
Our story begins as Jessica bounces onto her twin’s bed bright and early to remind her mirror image that it’s the day of the class trip! How could we have forgotten? Elizabeth is wide awake now and reaching for her robe. The class trip is to take place at a Disneyland-type amusement park called The Enchanted Forest which is described as “One of the biggest amusement parks on the West Coast.”
What will Jessica wear? She hurries to call her best friend Lila Fowler to consult on the perfect Enchanted Forest outfit. We get a few quick lines about the silly, at least in Elizabeth’s opinion, Unicorn Club. Liz has decided on her white jeans and blue top as her Enchanted Forest outfit while Jessica arrives at breakfast in her green jumpsuit but her hair is not yet combed. Thumbs down to the artist who drew everyone in Sweet Valley wearing blue jeans.

They go on Adventures under the Sea in 3-D, where Liz is reminded of Sidney, they ride the carousel, and while whriling dizzily with Jessica on the Witch’s Magic Cauldron ride Elizabeth is just so incredibly happy to be with her sister, she’s about to burst! She so happy she suggests to Jesscia they go ride that new super coaster and she finds, after all her "adventures", the roller coaster isn't so scary after all! As the day of the class trip draws to a close, Elizabeth buys a lavender sea serpent puppet from one of the gift shops as a souvinier.
Was it all really just a dream for Elizabeth? As they pass the Farmer in the Dell attraction one of the life sized animals, a white mouse, waves, “Bye Elizabeth,” she called. Hey those characters never talk! Amy insists and how did she know Liz’s name? But Elizabeth just smiles and turns to wave one last time at Allegra before they slip past the gates to the waiting bus.
The End