The Other Woman has already been done, but I can't not recap this. I can't not. It's impossible for me to not. This was my ABSOLUTE FAVOURITE book in the SVU series when I was a kid, because A) Jessica has sex, which I always thought was scandalous whenever it happened; 2) Elizabeth's reporting puts her in danger; and 3) because Bruce and Lila.

Check out this guy on the cover. This guy is Louis Miles, Jessica's sex-crazed professor, and there is no possible way he is anything but a serial killer. Look at that jacket. That hideous jacket has elbow patches too, I'm sure of it. Serial killer elbow patches.
Also, there's a globe in the background. I can't remember what Professor Louis is a professor of, but it had better be a globey thing. Even just a Professor of Globes will do. 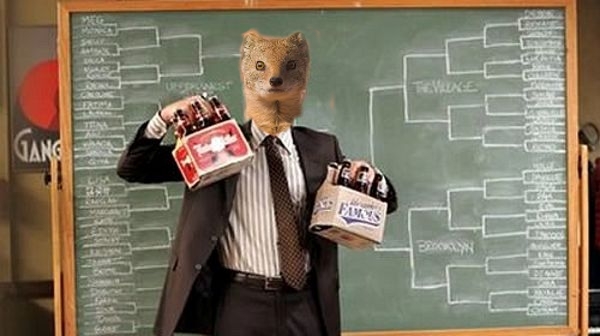 Also, the syntax reminds me of Zoolander's, "What is this? A centre for ants?" and that makes me laugh. Anyway. Jessica drives to the prof's condo. She yells at him in the rain. Then they fuck. DRAMA! The next morning, she drives off only to have someone in a black Mazda continuously bump into her. She's like, "Screw your Mazda, bitch; I drive a Jeep," and decides she's going to outlast this clown, whom she believes is one of the corrupt jocks you're about to hear about in Liz's plotline.
Professor Louis is making himself a cup of tea in what is probably his one remaining un-crushed mug when he gets a call. It's his wife. She says she's driving behind Jessica right now, and she's "about to run Blondie off the I-87 at the Pine Bluff construction site." That's an oddly helpful threat, Mrs. Miles. You want to give him your exact co-ordinates, too? She keeps her promise, and Louis hears a crashing sound on the other end of the phone. He likely feels bad about it, and I don't want to know what he did to the mug this time. I just don't.
Meanwhile, Jessica has managed to steer her car to safety. Who knew Jessica Wakefield was such a badass stunt driver? The first thing she says is, "I'm so glad I didn't die," which feels like an understatement, but whatevs. Crazy Mrs. Miles comes over to her and tells her that Professor Louis is her husband and Jess had better stay away. It is not mentioned whether this kind of blatant threatening behaviour is approved by the Weasel Code, but I think probably not. Also, colour me amused that the obviously crazy professor has an obviously crazy wife. That's cute, in an oddball way. It's just like Silver Linings Playbook, if Silver Linings Playbook had ended with Jennifer Lawrence beating Nikki to death with a lead pipe while Bradley Cooper sat in the corner, rocking back and forth and pooping himself.

The C Plot: Winston and the Completely Disproportionate Punishment Police
We're almost at the good stuff, so I'm going to breeze through this Winston plot if that's alright with y'all.
Winston is failing Physics 101. Winston has stolen a copy of his latest Physics 101 test. Winston is scared of flunking out of school. Winston doesn't want to flunk out of school, because then his girlfriend Denise will dump him. Winston does not want this to happen.
Winston goes to do his test. Winston is nervous. Winston fakes a coughing fit. Professor Stark, the only professor in this book not currently putting his penis in his barely legal students, tells him to go get some water. Winston does so, then decides to use the test he's stolen to cheat.
Winston gets caught. Professor Stark shows no mercy. Denise breaks up with Winston. Winston and his parents go to meet with the disciplinary committee. The disciplinary committee think that Winston's an okay guy and decide not to punish him. Winston's dad is apparently a dick and wants them to send his son to the army.
Wait. Hold up.
Winston's father, the man who sired Winston, wants the university to send his one and only son to the friggin' army because he cheated on a test? What in the actual fuck? Mr. Egbert wants Winston to sign up for the ROTC, an acronym this Australian is unfamiliar with, but Winston and Wikipedia assure me is definitely the army. The army. Okay, back to the recap.
Mr. Egbert wins the round. Winston is now in the army. Denise, too, is now in the army. Denise and Winston make up, in the army. The end. Expect the next book to be Stripes.

The D Plot: Lila and Bruce, aka Why We Love Sweet Valley University
The Bruce/Lila saga picks up where we left off in the A plot, with them moving their worldly possessions into the Fabulous Beachfront Apartment for Fabulous People. Lila complains that Bruce has too many tennis trophies, and Bruce concedes that they may need to have three more fireplaces built just so he has enough room for all his accolades. Just as Lila happily tells her beau that their whole lives are going to be absolutely perfect, their landlady rings the doorbell and informs them that their cheque has bounced. She holds up the cheque that has RETURN! INSUFFICIENT FUNDS! stamped all over it, and Bruce is like, "Bah, what are these words?" He assures the landlady that this has never happened to him before, which I'll be kind and assume is the first time he's had to say that to a woman in any situation.
Bruce tells Lila that his new trust fund somehow works out so that he only has a certain amount of his own money to spend every month. I don't know enough about trust funds to work out whether this is right or not. Lila tells him that all her money is tied up in Italy, what with that whole exploding Italian count thing, and that he ought to call his trustee (Uncle Dan, whoever that is) and get some more moolah.
Uncle Dan, it seems, already knows about his nephew's money sitch. He says that Lila must be a gold-digger, like all women, and he ought not invest a cent in that broad. Bitter much, Uncle Dan? After Uncle Dan hangs up, Lila says that they can't ask her dad for money, because he's a Capulet, and he doesn't want his daughter shacking up with no Montague. Shameful priorities, Mr. F. Lila goes all Scarlett O'Hara and wails about how they just have to live together! Bruce says they can still do that, they just have to do it like regular college students and give up the beach views. Lila says, "You mean we could get something in the mountains?" Oh, Lila.
Bruce finds a one-bedroom for them to look at, but when they go to see the place, he's horrified to discover that it's the attic of a three-storey house. That's storey, Americans. Not story. That's not how that word is spelled in the King's English. I let the cheque/check thing go before, but this one's new to me, and I am horrified. Anyway, Lila decides that living like bohemians might actually be romantic, and she agrees to live in the shithole with Bruce. Fabulous Beachfront Apartment for Fabulous People, we hardly knew ye. Now it's all about the craptown attic apartment...for fabulous people.
Later that night, Bruce and Lila sit on the couch and laugh about how neither of them knows how to cook. Seems they tried to make themselves dinner, and Lila burned the heck out of some squash. Bruce then went to get pizza. He's the bestest. Lila closes her eyes and imagines how she's going to redecorate the place when her money's no longer in lire. Bruce closes his eyes and works out that if he wants to, Uncle Dan can fuck him over on his trust fund for as long as he pleases. Not sure how that's legal, but alrighty. They nuzzle on the couch a little longer...until the ceiling collapses in on them.
Truly, though, this is not okay. No relative of Bruce's would be so cruel as to let these two live like this, and since Uncle Dan wasn't in Patmans of Sweet Valley, I'm forced to believe it's just some guy with the first name Uncle, last name Dan. Hear that, Uncle Dan? YOU ARE ADOPTED.
The next day, Lila gets on her hands and knees and scrubs the apartment clean. You go, girl! Way to acclimate. She rewards herself by having a bubble bath. You go, girl! Way to still be Lila. Of course now's the time a handyman comes by to repair the roof. He says that the landlady has gone away for the week, and she gave him a key to get it. He'd like to get to work, please. Never mind that Lila is all sorts of nekkid right now.
The tradie fixes the roof and says that he can give Lila a receipt so she can be reimbursed by the landlady when she returns. Lila sadly tells him that she has no money, and what does the tradie do? He gives her ten bucks and tells her that she and Bruce can have dinner on him tonight. Lila is really, truly touched by this man's kindness, and it changes her whole perspective on the crappy, falling-apart, no-beachfront attic apartment. Until she realises that, at some point between bathtime and now, the water has been turned off. Bruce has to actually fix it himself when he gets home. Luckily he's so handy and awesome. If I could, I would give him a plumbing trophy that he could add to his collection. Then Bruce and Lila have a pillow fight and some sex, because why not?
Well, that's it for today. Happily for me, my local Salvos store also had the next book, Deadly Attraction, which they never had at my library growing up. Happily for you,