So guess what, you guys? Jessica and Elizabeth are starting their sophomore year at SVU, despite the fact that there have been four summers since the damn series began. Yes, four summers. That's not my fancy, facetious way of saying that SVU went on  too long. There are literally four miniseries that specifically take place during summer. And a thriller edition that took place at the very end of one of the summers, but not the latest summer, because Jess was still living at the Theta house. Who knows, it could've even been a fifth summer! 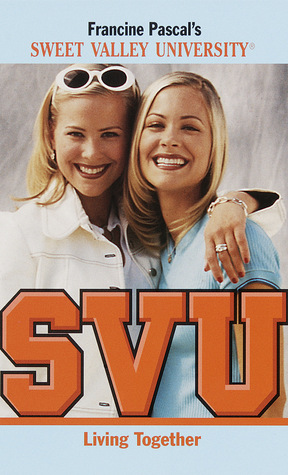 I like this cover. Jessica looks strangely like one of those overly made-up toddlers whose horrid mothers enter them in beauty pageants.  Liz looks hawt and not particularly toddler-like.

The B Plot: Todd, Dana and the tears of a clown
Todd has decided that he really, truly, loves Dana in a big way. He even bought her perfume "just because it was a Wednesday." That is so unlike our Toddles, and not just because it seems strange that he would even know what day it is. I wish someone would buy me gifts just because it's Wednesday. Wednesday gifts ought to be a thing. Just when I think Todd could actually be normal, he randomly does a striptease and tells Dana to "behold my studliness!" Oh, Todd. This is why we love you.
Turns out that Todd's been crashing at Dana's place because he missed the deadline for the housing lottery, and surprise of all surprises, he's fairly comfortable with crashing at his girlfriend's every night and isn't really trying to find a place at all. Oh, Todd. This is why we hate you.
The next day, Todd's halfheartedly trying to find himself his own casa. One of Dana's roommates (Molly) yells at him to get off the phone, and he says, "No wonder he hadn't found a place yet, when he couldn't even get five minutes of privacy." Yeah, in someone else's house! Todd decides to get in the housemates' good books by cooking a fancy dinner for them all. Except that he can't. Cook. Because he's Todd. Todd can't cook. At all. He's so incompetent that he manages to completely ruin Joyce's (Dana's second roomie) expensive pots and pans. Joyce comes in and yells that, "I should have known it was your doing since it smelled like something died in here." I can't work out if she means that Todd's generally a stinky guy, or if it's a callback to the fact that he kind-of likes to kill things. (Or at least threaten to.) Joyce then says that everything he touches turns to gross, so I suppose it's the first one then.
Cut to Dana and Todd, coming home from a date and walking straight into this:

The housemates complain that Todd is taking up all their time, space, energy, hot water, et cetera. While they're listing all the reasons why Todd is such a Todd, Dana's "praying that he would keep his temper in check." Keep praying, Dana. To all the gods. Todd almost manages to get himself a reprieve, but ruins it by questioning why he's not allowed to leave his socks around but they can hang their "stretched-out bras and skanky, disgusting underwear" all over the bathroom. Molly's like, "Because we pay rent, fuckface!" and the three of them take a vote and kick Toddles out immediately. Dana boldly stands up for her man, telling the housemates that if Todd goes, so does she.
Cut to Dana and Todd is a sleazy motel room. Since Dana's so clearly upset, Todd decides to cheer her up by asking her if she wants to give the vibrating bed a go. Spoiler: she does not. Apparently she's been lying there, crying for hours on end. Here's the thing, though -- I'm not sure if it's from the housemates-kicking-her-out thing, or the motel room's decor of "paintings of sad-eyed children in clown suits." WHAT?! Did Todd ask for the nightmare suite? That is, quite frankly, terrifying. Nobody has ever taken a woman to a motel room adorned with sad clown babies with any other intention but to face-stab her. Dana is going to get stabbed in the face here.
The next chapter starts with, "A sorry excuse for a man -- that's what Todd was." No arguments here, Toddles, although as the pioneer of Wednesday gift-giving, we really expected more from you this year. He also manages to clench his hands into fists and curses his powerlessness, because the secret to becoming a man again is to physically punch the concept of powerlessness in the throat. Or something. Really, I just want to know how poor Dana is and if her face is still un-stabbed.
Oh, and there's a great part here where Todd finds a flyer for a spare bedroom that looks promising, only it turns out to be for Elizabeth's duplex. He's all, "Fuck that."
Would you look at that -- Todd's blindfolded Dana. Did I tell you or did I tell you? After what's left of Dana's stabbed face is finally recovered, the world will ask: was Todd Wilkins possessed by the hateful spirits of the clown babies, or was the existence of the clown babies proof that the darkness was already in his heart? Joyce, the housemate who told him he reeks of death, will probably testify to the latter.
Dana asks if she can take it off, and he responds with, "If you're referring to any item of clothing besides the blindfold, be my guest." Hmm. Naked face-stabbing. Should've seen that one coming. Todd takes off her blindfold and reveals his surprise -- they're not in the nightmare suite at all! He's found a house that they can rent! It's a little far from school, and apparently it makes the Wakefields' run-down house look like the penthouse at the Ritz, but it's infinitely better than the sad circus motel, right?
Todd and Dana manage to move all their stuff into their place in like a day or something. But uh-oh -- they have no money. Like, not even for dinner. Who in the hell leases their house to two broke college students with nary a job between them, and literally zero dollars to their name? Todd thinks that "he should have been used to the feeling of utter inadequacy by now." Ahahaha! Has a ghostwriter ever trolled so transparently before? Todd's never been this self-aware! He manages to find some tomato soup and not burn it to hell like he did with whatever he put in Joyce's fancy crockery a few chapters earlier.
Later, Dana plays the cello, Todd thinks she's amazing, and they proceed to fuck loudly to further piss of the neighbours. Top that, Plot C!